From where do Omanis get their turbans?

Oman requires, on an average, around 5.7 million pieces of turbans every year. They are not manufactured in the sultanate – then, where do the Omani turbans come from?
Omani entrepreneur, Sameer al Zadjali, who has a patent for a new design for the Omani turban as well as another for devising a unique style of tying it, says research has led him to believe that the Omani turban has its roots in Kashmir, in India.
Even as Zadjali plans to create a special lounge in Muscat to showcase the craft of weaving and embellishing this Omani male headgear, opinion appears to be divided on its origin. There are some who suggest that the tradition of wearing turbans in Arabia was a ‘recommended act’ that can be traced to pre-Islamic times. Others find its roots in the 14th century, amid controversy on whether it originated in Persia or Kashmir.
Zadjali says he had always been intrigued about the style and origin of the Omani headgear and wondered why it had its roots in Kashmir where skilled artisans slogged for several weeks and months to produce this explicit weave. His proposed lounge is an extension of his own quest and he plans to bring in traditional weavers as well as machines from Kashmir to customise turbans and exhibit the 16 steps that go in the making of each turban.
He disclosed that his research caused him to conclude that the Omani headgear was a shawl prepared from ‘pashmina’, a down fibre or undercoat derived from a domestic goat, known as Capra hircus, which is native to the mountainous region in India. Also, that the founder of the shawl industry in Kashmir was king Zain ul Abidin, who taught this art to the people of Kashmir by getting experts from Turkistan to Kashmir over hundreds of years ago.
“I have a plan to set up my own museum in Oman, in the form of a VIP lounge, where people can come and see the different steps involved in the making of each missar. I am keen to also include the making of the Omani caps – kumma and the Omani dagger – khanjar, as per traditional specifications so that foreigners as well as Omanis can get to understand the heritage of Oman,” said Zadjali.

Each person buys 4-5 turbans a year

Noting that Oman requires to the tune of 5.7 million pieces of turbans every year, Zadjali pointed out that the entire business gets outsourced since there aren’t any formidable players in this industry in Oman yet. “Each person buys around 4-5 pieces of turbans every year. I myself need at least 50 a year, since I match them with my attire and personal effects,” he said explaining that turbans present a gigantic business in Oman.
He also pointed out that the Omani turban is available at a range of prices but most people are unaware about the care one needs to take to preserve it for long. There is a particular way to tie the turban as well as to clean it and store it so that the fabric does not get destroyed, he added.
Explaining further about his research, he disclosed that Sultan Zain ul Abidin had been very famous for propagating the use of the pashmina shawl. So, came to be known as ‘Akbar of Pashmina’. Zadjali discovered from his research that the use of the Pashmina shawl for a turban was introduced about 700 years ago, and it was mainly used by the rich. There was also another luxury pashmina shawl called ‘shatoosh’ procured from the hair of a goat having short stature and living on the hills at sub-zero temperatures. This variety was very costly and gifted by only very rich people to each other, he informed.

“Turbans made from pashmina, should not be used everyday, it should be
rested after about three days to prevent it from loosing its shape. It should not be washed with water in the normal way, dry-cleaning is the best solution for cleaning missars,” Zadlaji said adding that he includes a booklet with instructions for handling, preserving as well as tying a turban in the right way.
Zadjali has made frequent trips to Kashmir as he collaborates with artisans there who supply him with the shawls for his turbans. There are a set of Kashmiri artisans who work exclusively for him, though most are unaware of the origin of the pashmina shawl, he said.

Meanwhile, Jamal al Moosawi, director of the National Museum of Oman, said, “There are two main terms used in Oman to describe a man’s head-dress – Al Imamah and Al Missar. The tradition of wearing turbans in Arabia can be traced to pre-Islamic times, to protect Arab men from the sun, sands and winds in their desert environment. In Islam, covering a man’s head is a ‘mustahab’ act, an act that is recommended. Over time, male styles moved from purely practical towards stylized, often with a religious connotation.”
He further explained, the white, pure-cotton Omani turban worn by religious Omani men can be traced to the time of the Holy Prophet (Pbuh), as it was said to be worn by the Prophet’s companions. Wearing such a turban is a religious statement of an adherent ‘Ibadhi’ Muslim in Oman.
Those who descend from the Prophet’s holy progeny and have attained a certain religious status as pious scholars are allowed to wear a plain green or plain black turban (a minority in Oman) – as was the case with the Prophet himself. There are also regional styles of a male headgear, such as in Sur. Up to the 1970s, it was common to see Omanis wearing plain striking orange coloured natural dye turbans, he added.
As for the distinct ‘Saidi turban’, it was introduced during the time of Sultan Sayyid bin Sultan al-Busaidi, Sultan of Oman and Zanzibar. It was designed to make the royal family stand out from the common folk, Jamal pointed out, adding, “The Kashmiri turbans that we see nowadays, as worn by Omani men at government agencies, or elsewhere, had been introduced in the early 1970s.
Curator of Bait al Baranda, Malik al Hinai, has also asserted, “As for the history of shawls and turbans, obviously, it came from the Indian sub-continent, as can be seen from the weave and patterns. A substantial amount of our Omani cultural aspects and influences derive from that part of the world, due to its proximity to our region. In particular architecture, cuisine, women’s clothing, and the turbans which were created to keep our heads cool during summer.”
He, however, pointed out that the history of the Missar dates back to the 14th century and the controversy, whether it was brought from Persia to Kashmir or from within the Indian territory, still stands true. “In olden times, when one was told that merchants came from afar, it could either mean from a few valleys down the road or even from a bordering country,” he said adding, “Missar is an integral part of our Omani society and an elegant formal wear.” 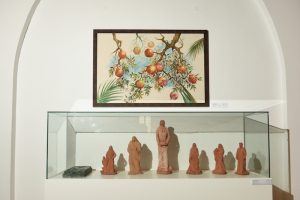